Several weeks ago, we had a mother (in-law) and daughter duo come in to get some henna done.  The henna was for a religious celebration they were going to take part in a couple of days later, and as tradition from Pakistan (where they were from), they wanted to apply henna.  Traditionally, henna has been applied for hundreds of years as part of celebrations, like weddings or child-birth, but also for other occasions like a religious holiday or coming of age.

The mother wanted to get a circular design on the palm of the hand and have her fingertips colored in all the way.  While this is something traditional, the daughter was not so fond of that idea.  Instead, she asked us to do something that would still cover her fingertips, but would not make them look nasty a few days down the road.

For the circular design, we opted to do the mandala style designs on the palms.  We kept the flow of the designs similar, but changed up the details of the design so that the mother could have some different but same henna.  Instead of coloring in the fingertips, we opted for a checkerboard pattern on the finger tips.  This still filled in the mother's fingertips, but at the request of the daughter, it would be more modern and contemporary. 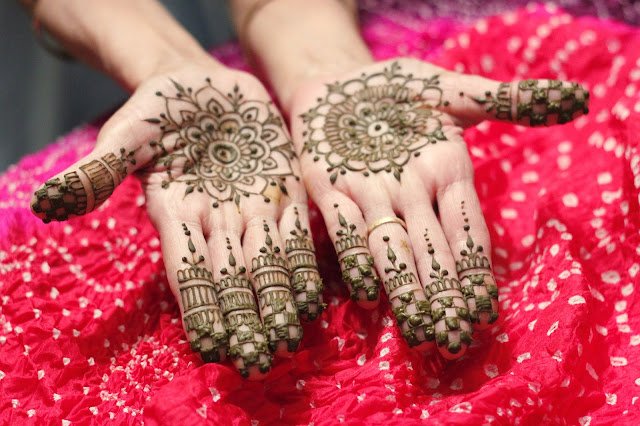 The daughter was very pleased with the results of the mother's finger tip designs.  She also wanted to get henna done, but only on one palm (so she could drive home).  She left the creativity to us for her palm design, but had one request--she too wanted some sort of checkerboard pattern in her design.

Instead of doing the exact same checkerboard design for her, we opted for a little twist in her design.  By angling the lines of the checkerboard, the fingertips had a modern and unique feel to a super simple design. 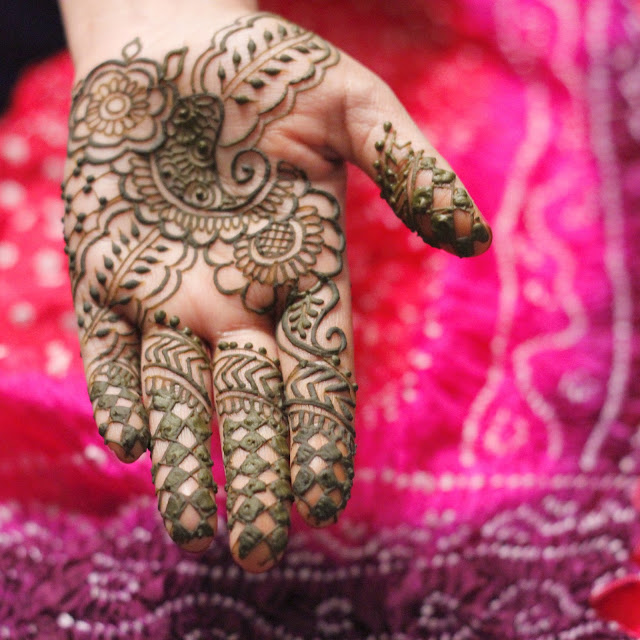 We also incorporated more geometric elements in her design to balance the flowers and paisleys in the palm.

Both the ladies were very pleased with the outcome of their henna designs.  This was done with 2 private sessions (20 minutes of henna time, 10 minutes of drying time). 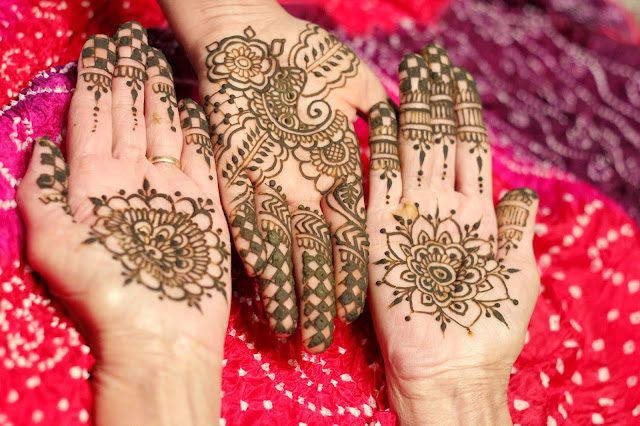 Our beautiful background is a silk bandani scarf.  Bandani is the art of hand tying fabric in various patterns and then dying it different colours.  There are lots of patterns that can be acheived with bandani style tie-dying and it's a completely hands on form of textiles.
checkerboard eid henna henna designs mehndi pakistan traditional henna www.hennaart.ca